Discovered by Polynesian settlers between the 3rd and 7th centuries A.D. and later by British Captain James Cook in 1778.

Hawaii is the only state that is not part of the North American continent. It is also the southernmost of the states, lying about as far south as central Mexico.

A chain of 132 islands make up the state we call Hawaii, though we generally only think of the eight main islands, each of which is the top of a submerged volcanic mountain. 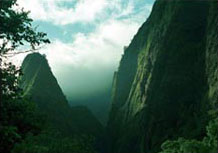 The remaining 124 islands together only comprise about three square miles and are not fit for human habitation.

All of the main islands, with the exception of Kahoolawe, are inhabited.

Some of the coastline is comprised of tall cliffs rising straight up from the waters edge. In some places, large rocks of lava protrude from the water along the shore.

Most of the beaches on the islands serve up beautiful white sand. Some beaches are covered with black sand, formed when molten lava met the ocean.